Misuzu (last name unknown) is a character that appears in the Midori Days Manga. She is only seen in one chapter: Day 15: Greasy Little Punk.

Misuzu is first introduced when Seiji finds her and Osamu in a park. Seiji comes to the conclusion that it is Osamu's girlfriend, and becomes infuriated at the idea of his best friend getting a hot girlfriend before he did. As Seiji listens into the conversation, he finds that their relationship is built on the fact that Osamu has promised to help cover medical bills for her younger brother. He lies and states his family has money, but has actually gotten several jobs to earn the cash and help her out. She seems very excited at this. She admits confusion as to why he wants to keep their relationship a secret, but admits it's mainly because he knows Seiji would be livid with him over having a cute girlfriend.

In truth, Misuzu is actually a con-artist. She works with a man who is not named in the chapter, and the two apparently squeeze innocent people for money through scams. In this case, Misuzu, mistaking Osamu for a rich kid, begins asking him for money to help with medical bills, when in truth the money is likely split between the duo. Seiji tries to tell Osamu, however he refuses to listen and believes Seiji is just jealous. When Osamu confronts her over this and believes it is a lie, her and her friend break the facade and admit that this was all just a scam. She doesn't try to stop her friend from beating up Osamu, but also doesn't try to rationalize her behavior to Osamu either. She doesn't appear to show remorse for her actions until Osamu, even after having been beaten up, hands her the money for the doctor's bills just in case. She did not appear to hold any affection for Osamu personally, but did show guilt after he tried to help her out despite her lies.

Osamu tells Seiji a few days later that someone he "lent cash to" paid him back. The implication of this being that Misuzu, feeling guilty, returned the money to Osamu. Whether she continued scams or not isn't explained, as she is never seen again. 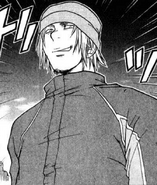 The unnamed man Misuzu works with.

Add a photo to this gallery
Retrieved from "https://midorinohibi.fandom.com/wiki/Misuzu?oldid=4418"
Community content is available under CC-BY-SA unless otherwise noted.