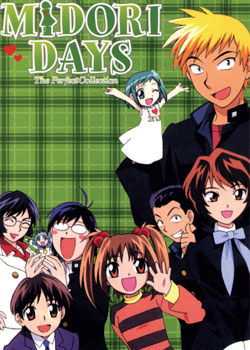 Midori Days (美鳥の日々, Midori no Hibi) is a shōnen fantasy manga by Kazurou Inoue. It was published by Shogakukan in the magazine Shōnen Sunday from September 2002 until October 2004 and collected in 8 tankōbon volumes. It is licensed in English in North America by VIZ Media and in Singapore by Chuang Yi.

Seiji Sawamura is a high school student and known street thug. He belongs to no gangs, but is well known as a prominent fighter. He skips school, has a large adult magazine collection, and gets into fights of which he always wins due to his incredible punch from his "Demon Right Hand'. The one thing Seiji wants, however, is a girlfriend. Denied repeatedly due to being known as a thug, he tries to ask out any girl he can but gets nobody. Frustrated, the night of his 20th denial, he sits in his bed angrily proclaiming that nobody will love him but his right hand, and wonders if any girl will ever love him. He suddenly hears a small voice coming from his arm, and after a small panic, he realizes his right hand has been transformed into a miniature girl. The girl identifies herself as Midori Kasugano, a young freshman who goes to the local upper class high school. She had fallen for Seiji quite some time before this incident, however her shyness got the better of her, and she has never managed to admit her feelings despite watching him from afar. As the series continues, the two begin to further a relationship, and go day to day. Midori meets new aspects of Seiji's life and sees him in his private moments, while Midori begins to affect Seiji and make him want to better himself and go to school.

In her real life home, her mother worries about her daughter who has become comatose. Her mother will try to find any magically adept individual (shamans, priests, monks) who will be able to bring her daughter back at any cost.

The manga follows a progressive format, with each chapter mostly being self-contained. Most of the chapters do not reference older chapters. Characters vary between chapters, and many characters are absent through most of the chapters (with the exception of Midori and Seiji).

Midori and Seiji play an equal protagonist role, with Takako Ayase fulfilling a deutagonist role. Some characters do show up during the manga to play antagonist, but this varies chapter to chapter and the manga has no overall antagonist. Multiple chapters exist where there isn't even an antagonist at all, and the plot simply revolves around Seiji, Midori, Ayase, or one of the other various characters. Midori and Seiji are always present, but are not necessarily always the focus.

Most of the humor comes from daydreams from Seiji and quick character reactions from the rest of the cast. Throughout the series Seiji will regularly daydream several panels invoving Midori being found out, and usually start and end comedically (for example he imagines Midori being found, the two becoming famous, then Seiji being stabbed by an out-of-work ventriloquist). Despite being Japanese, most of the humor is ambiguous at best and can be fluently understood in foreign markets. The manga makes very few references to any Japanese in-jokes and mainly focuses around the characters antics and behaviors, most of which are either zany or bizarre.

The manga progresses as a "slice of life" styled manga, focusing more on day to day interactions with other characters. Beside's Midori inexplicably becoming Seiji's right hand, there is no other magical forces in the manga. The rest of the cast are normal humans, and have no special powers. Many of the characters due possess comedically high amounts of physical strength however (which lends to many gags).

The manga's focus is on change and progression, as Seiji's interactions with Midoribegin softening him up. It causes him to start attending school, making friends, becoming nicer, and interacting with others on a much kinder level. Midori's plots mainly revolve around her finding out hidden secrets about Seiji and falling for him more and more. Examples include stories about his childhood, his unwillingness to fight people weaker than himself, and the various people in his life who adore or comedically torment him. Character developtment is a major focus, as characters are shown to recognize, discern, and alter things about themselves as they begin to interact with others (much like an adolescent does). The dialogue never gets too serious, but does try to show that it is indeed proving a point about the characters. Being adolescents, many of the problems involve friends, girls/boys, living at home with parents out of the house, and self recognition of ones own character and coming to terms with who they are as individuals. Midori's biggest hurdles are accepting that things change, and that she must become a stronger person capable of telling the one she loves her feelings.

Each manga would feature a short Yonkoma (gag strip) at the end of each issue (read top to bottom) where the characters would do some quick silly gag for a final laugh.

The anime follows the manga very closely and does a very good job at keeping most, if not all scenes, intact. Due to time constraints (and time conversions from manga to animation), some chapters fulfill the role of two or three plots in an episode. An example of this is the plots of Seiji in gym class, Seiji passed out from drinking Rin's tequila, and Midori being very sick, are combined into a single epiosde. Each one comprised its own self-contained chapter in the manga, but made up one 30 minute episode in the anime and were combined to create a single plot thread that wove together seamlessly rather than three individual plots. Despite this, the overall manga transcripts and dialogue were kept, along with the emotions intended for each scene, and very little dialogue was altered.

The anime focuses on sight gags, and plays a joke involving more animated and silly daydreams from Seiji that can be better gotten across by the animation. Virtually every daydream Seiji has is entirely altered to better suit the animation of the show, and a new joke segment pops up where several seconds are devoted to a different characters internal thoughts (ex "Ayase Days" for Ayase's fantasies about Seiji and herself being together). The jokes are also coupled a lot with a musical score to fit the moods, and goofy music, another item manga cannot get across.

Despite this, the manga contains multiplier characters not seen in the anime, most obvious Lucy Winladd and Nao Makinoha, with minor characters altered or taken out. Kouta's homosexual attraction to Seiji has also been removed, however its removal has demoted him from side character to background character, as he has far less dialogue, appears less, and has much less bearing on plot or gags.

The manga also contains many chapters that were not in the anime. The anime contains only one episode that was not present in the manga, where Midori and Seiji are asleep, and each has their own dream about them being switched (Seiji is Midori's right hand). The manga plots involving Nao facing her father's bloodlust to dissect Midori, or the plots involving Lucy and Miyahara have been stripped as well.

The ending also differs slightly, as does the progression of the ending, making this the most significant part. An example is that Ayase confesses her affection for Seiji before the ending chapters (where Midori reawakens), whilst she admits it much later during the final episode (after Midori has reawakened). The nature of the ending changes as well, but both endings do end with the same ending and under the same emotion, thus even though they are different they end on the same exact note. The manga also has a shorter epilogue than the anime.

Community content is available under CC-BY-SA unless otherwise noted.
Advertisement