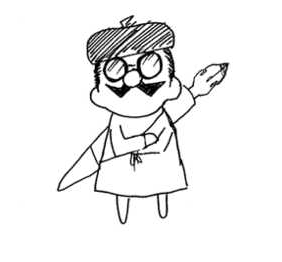 The God of Comics is a character that first appears at the end of volume 2 in the The Days Before Midori Days bonus manga. He is an overly excited god who can teach Kazurou Inoue about comics, but is clearly less helpful than his ego implies. He makes a brief appearance in the manga itself as a fortune teller that tries to help Takako get over her embarrassment of asking Seiji out.

The Days Before Midori Days[]

The God of Comics is supposedly a magical entity that knows everything there is to possibly know about comics. He treats everything extremely seriously, no matter how ridiculous he sounds when talking.

He appears to Mr. Inoue in a diner roughly a year prior to Midori Days being written, and proceeds to teach him his three lesson. Lesson 1: Impact. Lesson 2: Eroticism. Lesson 3: Love comics more than anything. He is both confusing and hypocritical, never truly explaining what he means by impact, and being a lover of modeling magazines moreso than comics.

In volume 7, a character that appears to simply be a fortune teller calls Takako out on knowing she is having some problems. He decides to assist her in overcoming her fear, and puts her in a series of incredibly embarrassing situations.

His strategy involves putting Takako in a series of trials such as cosplaying while singing to a crowd, buying a specialty pornography magazine in a crowded book store, handing out fliers in a sexy outfit, and ordering at a fast food restaurant. Her final test is wearing an oversized button-up shirt with huge sleeves (that doesn't make it clear how much she is wearing underneath). She becomes too embarrassed after confronting Seiji like this, and runs away, only to realize the fortune teller was using her for his own personal entertainment (despite him arguing against it while videotaping her). She ends it by punching him so hard that, in the distance, Midori and Seiji believe it is a shooting star.

Despite the fortune teller not revealing his name, his height, character design, and personality are identical to the God of Comics. In essence, this is the God of Comics as canon in Midori Days. He only appears in the one chapter, and never appears again.

Community content is available under CC-BY-SA unless otherwise noted.
Advertisement